Theatre, live music, international sport, comedy nights and more – Nottingham more than holds its own when it comes to entertainment.

The godfather of that must be the 2,450-capacity Rock City, a truly legendary venue that’s hosted some huge names since opening in 1980. Head to our dedicated page on Rock City to read all about this Midlands institution.

Opened in 2003, it’s hosted an impressive range of names since, including The Killers, Calvin Harris and Bloc Party. The younger, slightly cooler musical cousin to Rock City, Rescue Rooms does a mean range of cocktails, has a range of board games and cool leather sofas in the bar to soak up the pre-gig atmosphere. With over 200 live gigs a year, this is the place to come and see the next big thing before they hit the really big time.

Where Rock City and Rescue Rooms are relatively intimate live music venues, The Royal Concert Hall is a totally different proposition. Built in 1982 and with Sir Elton John performing their first show, the space has welcomed a diverse range of entertainment to its stage including musicals, operas and stand-up comedians. It regularly puts on live music, with Nottingham’s very own Jake Bugg, Cliff Richard and Gary Barlow all recent guests. The 2,497-seater theatre has great acoustics and a highly professional setup, and is a great alternative to the rough-and-ready appeal of Rock City. 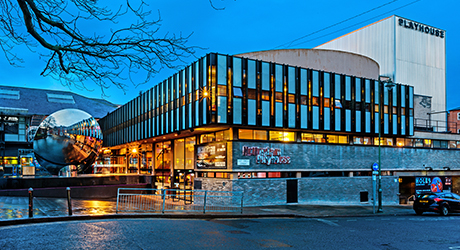 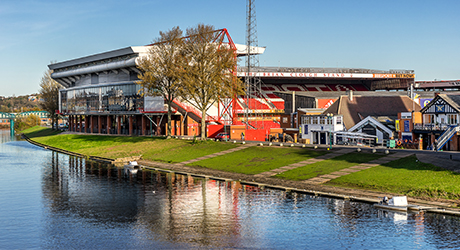 Home to several UK-renowned theatres including the Theatre Royal and Nottingham Playhouse, Nottingham has a vibrant theatrical scene. We’ve rounded it up in our dedicated page on theatre in Nottingham.

A nationwide chain, Just The Tonic is a weekly comedy get-together at the Masonic Lodge on Goldsmith Street. Held every Saturday, the bill includes a diverse range of four comics charged with making you laugh for several hours. You can also sign up for dinner and comedy deals including pizza, curry or something from the nearby Corinthians restaurant. Big names like Bill Bailey, Jo Brand and Ed Byrne have all worked their routines in the room, with rising stars Guz Khan and Sol Bernstein ones to look out for on future line-ups.

Alternatively, you can get your comedy kicks at The Glee Club. Running every Friday and Saturday night at Castle Wharf next to the canal, it’s hosted some seriously funny people in its time including stadium sell-outs like Michael McIntyre and Russell Kane. Located at the other end of the city from Just The Tonic, The Glee Club is a short stroll down the canal from our Castle Marina hotel and is surrounded by dozens of bars and restaurants including The Navigation (check out its 30-strong burger menu) and Canalhouse, a popular pub offering dozens of beers from across the world.

To call Nottingham a sporting haven is to put it mildly! It’s home to the oldest football club in the world, one of the most successful English football teams (albeit a sleeping giant just now) and an all-conquering cricket team that has supplied the England team with some of their best players.

Starting with football, the River Trent separates Notts County from Nottingham Forest. Formed in 1888, and with a record of games as far back as 1862, County are the oldest team in existence and have played nearly 5,000 games, more than any other English team.

Forest meanwhile have won the FA Cup twice and during the late 70s and 80s were the most successful British club as, under the guidance of Brian Clough, they won the league, two European Cups and two League Cups. Sadly, those glory days are a distant memory now. County play their games in League Two, the fourth tier of the league system while Forest are currently battling it out in the Championship having had several spells in the Premier League in the last few decades.

Nottingham Forest play their home games at The City Ground, an impressive stadium with a capacity of just over 30,000. The club have given England some of their most iconic players including Stuart Pearce, Roy Keane, Peter Shilton and of course, their mercurial manager Brian Clough, a folklore legend and the man who took them to the top of the European game in 1979 and 1980. Their ground is just 300 feet away from the County Ground, making them the closest professional stadiums in England. Notts County play their home games at Meadow Lane, a near-20,000-capacity ground, and have a somewhat unenvied record – with 13 promotions and nine relegations during their history, they’ve moved between the various divisions more than any other club.

Far more consistent are Nottinghamshire Cricket Club. Formed in 1771, they’ve won the County Championship over a dozen times, as well as various successes in one-day and Twenty20 competitions. Their summer home games are played at Trent Bridge, a stone’s throw from the City Ground and one of the most impressive cricket grounds in the country. Trent Bridge hosts international matches most summers including Test matches, one-day games and Twenty20 competitions, and has a capacity of 17,500. Nottinghamshire have an illustrious history, having been home to international stars including Kevin Pietersen, Chris and Stuart Broad, Sir Gary Sobers and Sir Richard Hadlee over the last 60 years.

All three grounds are dotted around the river. Trent Bridge and The City Ground are southside, two miles from our Nottingham South hotel. Cross the river on the A60 to find Meadow Lane.

Nottingham, the birthplace of Torvill and Dean, is home to the National Ice Centre. Opened in 2000, it’s the first twin Olympic-sized ice rink in the UK, and just a few minutes from our Nottingham Arena hotel. As well as being a huge ice rink with a capacity of 10,000 spectators, it’s also home to the Nottingham Panthers ice hockey team – who have won 12 cup finals since 1994 – and the GB Short Track Speed Skating Squad. If you’ve never been to an ice hockey game before, you’ve missed a treat! The facilities are excellent, the Panthers are one of the best teams around and the action is fast-paced, frenetic and, occasionally, brutal (they have designated ‘fighters’ in each team!).And finally, there’s the Nottingham Greyhound Stadium. The East Midlands’ home of greyhound racing, the stadium is a mile from County Ground and Trent Bridge at Colwick Park, with free parking for all spectators. The stadium boasts a restaurant, three bars and snack bar, and betting on the races starts at just 50p. Racing takes place every Monday, Friday and Saturday throughout the year.

An indoor arena that’s part of the National Ice Centre, the Motorpoint Arena Nottingham opened in 2000 and is a multi-use space having hosted boxing, UFC and live gigs from Metallica, Elton John, and Katy Perry.

We’ve included the arena, and others, in our full guide to stadiums in Nottingham.

Our video guide to entertainment in Nottingham