Coming to Birmingham for a big event or a big day out? If you’re arriving by train, make sure you leave plenty of time to enjoy the Grand Central shopping centre as you’re passing through. As part of the newly developed New Street Station, it’s turned what was a drab and gloomy shopping mall into a fitting gateway for the UK’s second city. Opened in September 2015, the centre is stunning to look at, with its huge, light-filled glass atrium and domed roof that’s made from the same material as the Eden Project in Cornwall. Although smaller than the adjoining Bullring, it’s cool and modern, and has 62 stores over one single floor, as well as the biggest John Lewis outside London. It’s just around the corner from one of our Birmingham hotels, making it a no-brainer for shopaholics. So where’s best to eat, drink and shop? Find out here! 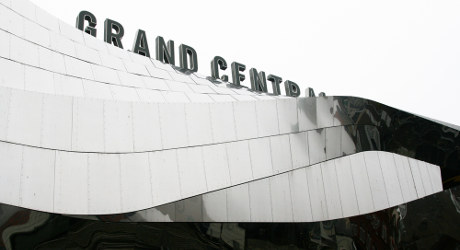 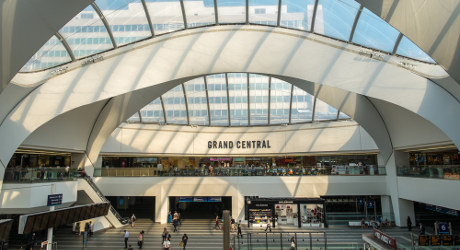 Get ready to shop til you drop - there’s a great mix of fashion and lifestyle brands to fulfil your shopping needs, whether you’re looking for a gift, or something for yourself.

Fashion
Grand Central has some major brands under its shiny domed roof. There’s Hobbs, Monsoon, Accessorize and Joules, as well as plenty of great options if you’re in town for a big event and need that perfect finishing touch. Jacques Vert is great for ladies occasionwear, while men should head to T M Lewin for smart shirts and snazzy accessories.

Lifestyle
Beauty-wise, there’s a MAC as well as a Kiehl’s where you can grab yourself a bottle of its signature Midnight Recovery cleansing oil. For gifts, there’s Tiger, Jo Malone or Pylones (which has the most colourful shop front in the centre). The bookshop, Foyles, is more of a cultural hob than a shop. Head there for book signings and children’s storytimes.

Department stores
Grand Central has the largest John Lewis outside of London and it has a calendar packed with events - at Christmas, for example, the store hosts drop-in ‘treetorials’ to help give your tree the wow-factor. Visit the Clarins Skin Spa if you fancy a beauty treat or, if you’re here with kids, take them to the fourth floor. You’ll find toys, games and the most child-friendly cafe you’ve ever seen.

With its world-class design, getting around Grand Central couldn’t be easier. Commuters, tourists and shoppers enter and exit via escalators and lifts from the station, leading directly into the shopping centre’s vast atrium. If you’re not arriving by train or using the station, there are additional entrances on Stephenson Street and the Bullring.

Grand Central opens from 6.30am until 11.00pm every day, but the main shops are only open from 9am to 8pm Monday to Saturday, and 11am to 5pm on Sundays. Restaurants are different though, with many opening earlier and remaining open until the centre closes.

If your other half hates shopping, park them in the atrium - it’s a lovely spot to watch the world go by - or at one of the cafes by the escalators and let them play on their phone. There’s free Wi-Fi throughout Grand Central. Just click on Grand Central _Guest to access the shopping centre’s website and the Wi-Fi.

Escalators from New Street Station take you to the Grand Central shopping centre’s impressive atrium - it’s the height of eight double-decker buses. From here, it’s easy to find your way around as everything is on one level. The food options are clustered around the escalators, while the John Lewis is on the southern side.

Lifts will take you from the station up to Grand Central, and there are accessible toilets in the main toilet block opposite Carluccio's. The facilities are fully equipped but users need to get the key from the customer information desk. There are 23 parking spaces reserved for disabled visitors on each level of the NCP car park on Hill Street.

If all that shopping has worked up an appetite, Grand Central has some fantastic restaurants, whether you wanted a quick bite or something more relaxed.

You’ll find some old favourites, like Pho, Giraffe Carluccio’s and Nando’s, but there’ll be a few places you might not have heard of. At Square Pie, everything is homemade - from the tasty pastry to the mushy peas and the mash. Or try Tapas Revolution for fresh churros, a takeaway bocadillo or a great selection of tapas just asking to be washed down with a cava.

Take a well-earned break from all that shopping and treat yourself to a cocktail at the Frizzenti Fizz! Bar, which serves fantastic still and sparkling wines - all on tap. Stylish, but completely unpretentious and affordable, it’s great for people-watching while sipping a Raspberry Mojito cocktail and nibbling on some delicate Italian tapas.

Getting to Grand Central

Being directly above Birmingham New Street station, Grand Central is easy to find once you’ve stepped off your train. Here’s all the details you need.

By car
For the 24-hour Grand Central car park, use the postcode B2 4BW. To get there from the city centre ring road, turn onto Smallbrook Queensway. At the first set of traffic lights turn left onto Hill Street.

By bus
Hop on a bus to Birmingham city centre - Grand Central is well served by bus and metro services from places all across the West Midlands. There are nearby bus stops on Smallbrook Queensway and Hill St.

By train
Grand Central is directly above Birmingham New Street station, the second busiest outside London. But both Moor Street and and Snow Hill Station are also near to Grand Central at no more than a leisurely 15-minute stroll away.