From intimate gigs in the other-world setting of Eden Sessions to big-name festivals and several quality theatres, the entertainment in Cornwall is alive with the sound of music.

Traditionally known for its folk music and – even further back – its Cornish music history dating from the 15th century, Cornwall is now home to several outstanding venues.

No music fan should leave Cornwall without booking a ticket to one of the Eden Sessions. Not only is the Eden Project an amazing complex of diverse climates and environments, since 2002 it’s hosted the Eden Sessions where a host of bands and acts are invited to play. Names as diverse as Lionel Richie, Skrillex, Elbow, Jess Glynne, Bryan Adams, and Eddie Izzard have all taken to the stage for a series of summer concerts. With their sky-touching domes in the background and thousands huddled in a natural bowl that enhances the acoustics, tickets start from around £40 per person but can sell out up to a year in advance, so book ahead. If you’re looking for somewhere to crash at the end of the night, our Fraddon hotel is around 15 miles away.

With over 300 events held across the town, the St. Ives September Festival is a 15-day event that brings together the music, art and literature worlds. Held every year, you’ll also find a series of walks, talks and Q&A sessions as well as street art, poetry workshops and film screenings. Live music events are held at The Guildhall and The Western Hotel, with traditional Cornish folk bands competing with more alternative acts including local indie and brass bands.

A worthy alternative to the big-name Boardmasters festival in Newquay, the Looe Music Festival is a three-day affair right on the beach in the seaside town. Started in 2011, this annual festival has welcomed pop, funk, punk, hip-hop and rock names including The Darkness, Johnny Marr, The Stranglers and Reef. Held towards the end of September every year, the music runs from 4pm on Friday until 11pm on Sunday night, with after-parties across Looe’s bars and pubs. Weekend tickets start at around £89, with our St. Austell hotel just a few miles away.

A 10-minute walk from the centre of Falmouth, Princess Pavilion is one of the area’s leading live music venues. With beautifully manicured gardens overlooking the Cornish coast, the 600-capacity music hall is the place to see acts like Ed Sheeran and Alt-J, while the Garden Room Bar and old-fashioned bandstand are often in use during the busy summer season.

One of the largest venues in the county, Hall for Cornwall attracts nearly 200,000 visitors each year for its programming of opera, ballet, stand-up comedy, West End musicals and live bands. With a seated capacity of 969, the hall books plenty of tribute bands and original groups including Scottish act Belle & Sebastian.

One of the major dance music festivals, Boardmasters in Newquay is now a three-day, seven-stage party that brings some of the UK’s biggest bands to Cornwall. 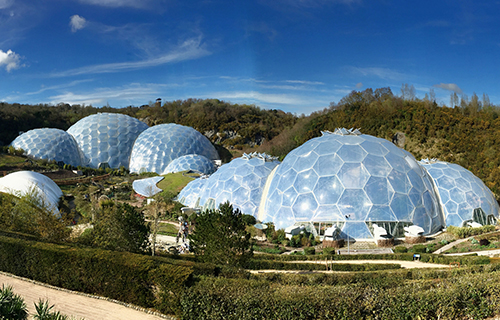 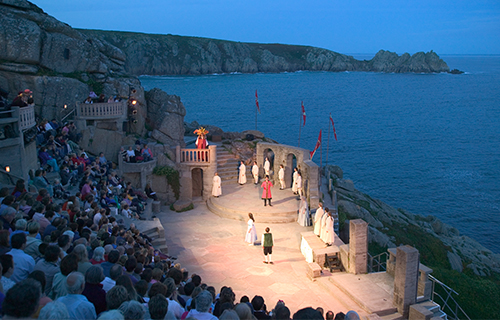 With the Atlantic Ocean crashing into the cliffs below and the vast Cornish sky twinkling above, the Minack Theatre is a real jewel in the UK’s theatre scene. Opened in 1932, the open-air auditorium was excavated to create an evocative space, and with the lighthouse twinkling at dusk as you lounge on a grass terrace, it’s hard to argue. Open throughout the summer, expect everything from classical concerts, plays, musicals and more with shows running at 1pm–7pm and tickets for the summer season available to book online from the start of March. Just a few miles from Land’s End, our Hayle hotel is the nearest, 19 miles away, with Penzance the closest main town.

The Poly, or the Royal Cornwall Polytechnic Society to give it its full name, is Falmouth’s home of arts, theatre and cinema and has been in operation since 1832. Located in the heart of the town, the Poly is always alive with talks, exhibitions, workshops and screenings. The theatre holds 180 people and, as well as regular shows and plays, also screens independent, art house and foreign films. But be warned – they don’t sell popcorn, to keep the noise pollution down, but on the plus side you can bring in drinks from the licensed bar.