Solihull has a handful of cultural offerings for you to get involved in during your stay. From one of the best motorcycle museums in the world to the busiest exhibition centre in Europe, take a look at our guide to find out more.

One of the town’s most popular regular events is Solihull Carnival. Taking place over three days in June, thousands of people enjoy some fantastic entertainment, fairground rides and activities for all ages, as well as local food and drink. It takes place in Tudor Grange Park, which is easily walkable and just south east of Solihull town centre.

The Solihull Food and Drink Festival hasn’t been around for quite as long as the Carnival. In fact, it only started in 2017, but it was an immediate success with the townspeople. It takes place during autumn, with nearly 100 food stalls and pop-up bars serving everything from gin masterclasses to jam roly-poly. Plus, there’s live music and celebrity demonstrations to keep you entertained while you feast on the festival’s fine array of foods. 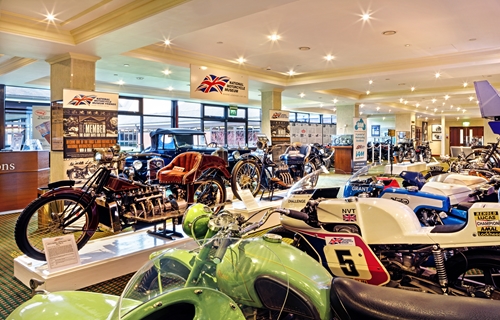 Solihull’s most well-known nearby cultural venue is the NEC. It’s the largest exhibition centre in the UK and the busiest in Europe. Every year it over 500 separate events, attracting more than six million visitors with the likes of Comic-Con and Crufts. There’s always something going on at the NEC, so it’s worth checking out during your stay. When the Queen opened it in 1976, it had just seven exhibition halls. Today, it has 20, plus more than 30 conference suites spread across its 600-acre site.

Another top option is the National Motorcycle Museum, situated right next to the NEC. It’s the biggest and best motorcycle museum in the world, with more than a 1,000 machines. It’s a fascinating place and attracts more than a quarter of a million visitors each year. If you want to find out more about what’s on offer, take a look at our dedicated page on the National Motorcycle Museum.

Along the same lines is The Transport Museum Wythall, home to more than 90 buses and a large collection of battery vehicles, such as milk floats. Many of the buses are still working and you can hop aboard for a ride around the local area. The museum is run by a friendly group of volunteers, plus there’s an on-site café if you fancy a cup of tea or coffee.

Sarehole Mill Museum is another good option. It’s a working water mill that dates back to the 18th century. In fact, there’s been a mill on the site ever since 1542. Plus, Sarehole Mill’s biggest claim to fame is that JRR Tolkien used to live opposite it. The world-famous author has even admitted that the mill and the surrounding countryside inspired his vision for Middle Earth in The Hobbit and the Lord of the Rings trilogy.

Last but not least, the Land Rover Experience gives you the chance to take a guided tour around the state-of-the-art Jaguar Land Rover factory, which has been an important part of Solihull’s industry for decades. You’ll get to see every stage of the production process. Plus, there are a number of different ‘experiences’ that you can choose from if you want to get behind the wheel of one of their cars for some serious off-roading.