Built in 1998 at the cost of £50 million, the Madejski Stadium is home to Reading Football Club and can seat up to 24,200 fans. The stadium was voted the best mid-sized arena in Europe by ESPN thanks to its modern facilities and stands. The pitch is a clever mix of natural grass with synthetic fibres interwoven in, providing a durable mix that works well across the seasons.

Built with fans in mind, the stands are close to the pitch providing great views from any of the four areas. There’s also a large video screen in the East Stand showing replays and highlights. The shape of the roof also ensures good acoustics for the singing fans, helping create a fervent atmosphere.

And the fans have had quite a bit to sing about since their formation in 1871. The club has played several seasons in the top flight, most recently in the 2012–13 season, while in their debut season in the Premier League in 2006, they finished a highly respectable 8th.

The club is currently in the Championship and managed by ex-Swansea boss Paul Clement and are looking to battle their way back into the Premier League. Local derbies include matches against Swindon Town and Oxford United.

The ground is also home to the London Irish rugby union team who are currently in the Premiership but under threat of relegation.

The Madejski Stadium is several miles to the south of the town centre, with our Caversham Bridge hotel only 10 minutes’ drive away.

Less than a mile from Junction 11 of the M4, the stadium has over 2,000 match-day parking spaces, with several unofficial car parks just 5–10 minutes’ walk away. There are several food and drink outlets in the ground including the Jazz Café, while the nearby retail park is home to a KFC and a McDonald’s. 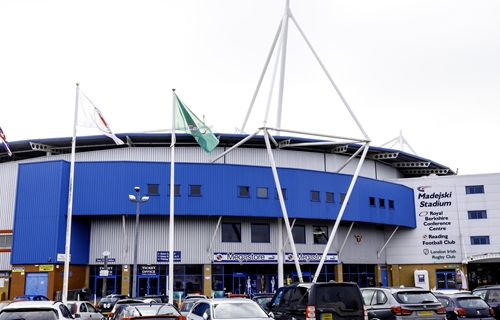