Ipswich is well known for its football club Ipswich Town F.C. (who currently play in the English Championship). Their stadium, Portman Road, has been their home since 1884, and is conveniently located really close to the town centre. After significant expansions in the early 2000s, the stadium now seats a capacity of over 30,000 (making it the largest-capacity stadium in East Anglia) with multi-tiered covered stands on all four sides of the pitch. Football fans will enjoy a visit to the ground – it has a friendly vibe with plenty of family spectators. 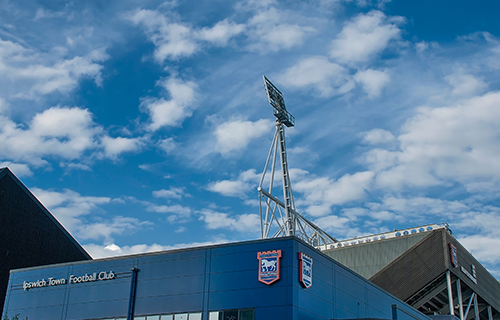 Over the years, the ground has played host to a variety of other fixtures. Initially it was also used by the East Suffolk Cricket Club throughout the summer months, with the cricket pavilion even the first fixed structure on the site (well before the first football stand was built in 1906). But Ipswich Town F.C. was a leader in the field, as one of the first clubs to install goal nets in 1890. The stadium has seen a range of events and other sporting matches over its history, including whippet racing in the 1920s, athletic meets, American football and several international hockey matches. Large music concerts held there also include performances by Elton John, Red Hot Chili Peppers, Tina Turner and more. The large stadium also occasionally hosts other gatherings and large events, including an 8,000-strong crowd of people for group Christian worship in 2005.

Going back to football, Portman Road has seen only one senior England fixture in its time – a successful 3–1 friendly against Croatia in 2003. But the England youth teams have played here more frequently, hosting competitors such as Switzerland and Moldova. With a record attendance of over 38,000 against Leeds United in the 1975 FA Cup, the stadium frequently draws crowds of around 20,000 to see The Blues play in the Championship. Portman Road stadium has also seen the team’s greatest success to date, with the club record score of 10–0 against Floriana of Malta in their first appearance in the European Cup in 1962.

Tributes to iconic Ipswich and England manager Sir Bobby Robson include the naming of one of the four stands, a statue outside the entrance, and the Sir Bobby Robson Suite restaurant. You’ll find the Legends Bar within the Sir Alf Ramsey stand, and the tunnel from which the players emerge is (unusually) at the corner of the stadium rather than the centre.

Reaching the stadium isn’t difficult at all from Ipswich town centre – it’s less than a mile if you want to walk from our Town Centre Quayside hotel, or a 10-minute stroll from Ipswich Train Station. The stadium offers nearby parking for match-day visitors (note that it’s residents-only parking along the nearby streets) but there are also plenty of pay and display car parks in the vicinity.