Lichfield doesn’t disappoint on the entertainment front thanks to a wonderful array of venues including a popular modern theatre, the city’s historic guildhall, a couple of popular amateur sports clubs and a year-round calendar of cultural events ranging from food festivals to historic roast beef parties.

If you want to see a show during your stay at one of our Lichfield hotels, then your No. 1 option is to pay a visit to the Garrick Theatre in the city centre. The modern, 562-seat theatre is named after David Garrick, the 18th-century English actor and playwright who was raised in Lichfield. The Garrick Theatre curates a mixed programme of original productions, touring companies and a Christmas pantomime. While it’s a relatively new addition to Lichfield’s cultural scene, having opened in 2003, it’s rapidly built a reputation for being a wonderful theatre.

Past in-house productions range from Shakespeare’s A Midsummer Night’s Dream and Shelley’s Frankenstein to John Osborne’s Look Back in Anger and Edward Albee’s Who’s Afraid of Virginia Woolf. Take a look at what’s on during your stay, and be sure to book tickets as soon as possible if you do plot to see something that takes your fancy. 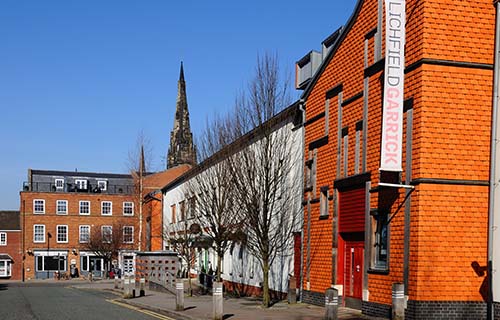 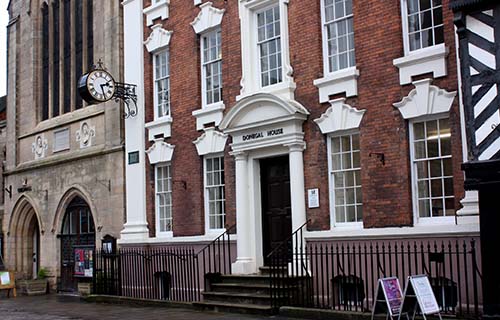 Fans of live music may want to check out any upcoming gigs at the Lichfield Guildhall on Bore Street. The historic-building-cum-arts centre manages to book an eclectic array of artists to perform for the people of Lichfield. The Guildhall can be traced back to the 14th century. While it’s been restored and rebuilt extensively over the years, it’s still a unique and historic venue for some live entertainment.

Depending on what time of year you’re thinking of visiting Lichfield, you may be able to join in the festivities of some of the city’s most popular calendar events. There’s always something for people of all ages and interests, so fingers crossed you can join us in celebrating the best of Lichfield.

The Lichfield Festival takes place at the height of summer. It’s a week-long celebration of the arts and primarily takes place at Lichfield Cathedral, which is one of our top activities in Lichfield. The festival began in 1981 and has grown like crazy into an annual programme of drama, dance, film, visual arts, literature, jazz, folk, classical and world music.

The August bank holiday brings the Lichfield Food Festival to town. It’s three days of eating and drinking, with well over 300 traders bringing their own brand of deliciousness to the people of Lichfield. Among them, you can sample some of our favourite places to eat in Lichfield all in one place. There are also celebrity chef appearances, workshops and tasting sessions of everything from chutneys to charcuterie.

The city’s oldest festival is the Lichfield Bower. It takes place on the spring bank holiday and honours a tradition that goes back 800 years to the reign of Henry II. The Monarch ordered that all men capable of bearing arms must gather to be inspected by the local magistrates. The men would then take to the streets, marching to a ‘Bower House’ to eat roast beef and drink spirits. Sounds great, doesn’t it? Over the years, the Lichfield Bower has evolved to include a funfair, market and competitions. It’s arguably the best day of the calendar to come to Lichfield.

In the week before Christmas, Lichfield Cathedral is lit up by the award-winning The Cathedral Illuminated light show. State-of-the-art projectors display a spectacular visual story across the front of the cathedral wowing the people of Staffordshire with jaw-dropping imagery and bespoke music from renowned composers. A word to the wise, you’ll need to purchase a ticket to see the light show, and they have a habit of selling out fast. So if you know you’ll be visiting our Lichfield North East (A38) hotel during the festive season and you fancy visiting the cathedral, be sure to keep an eye out for when tickets go on sale.

Lichfield Fuse Festival is one of the largest free festivals in the West Midlands. It’s a three-day live music extravaganza that takes over Beacon Park in July and brings nearly 20,000 visitors out into the sunshine (touch wood) for singing, dancing and a drink or two. The festival has been running for nearly 20 years, and entry is absolutely free.

When it comes to sporting entertainment, all you need to do is decide whether you want to watch rugby or football. Lichfield Rugby Club is one of the oldest rugby union clubs in England. It dates back to 1874 and boasts a proud history as one of Staffordshire’s most successful clubs. They are currently in the Midlands Premier division and play their home games at Cooke Fields. Your other option, Lichfield City F.C., is the local amateur football club. They play at the City Ground on Brownsfield Road. Take a look and see if any home matches are on during your stay.