There’s nowhere quite like the Exeter Phoenix. This multi-artform venue should probably have been called the ‘Exeter Chimera’, as it’s an unreal concoction of all things creative – part live music venue, part theatre, part café bar, part cinema, part art gallery, part… you get the point. There’s a lot going on at the Phoenix and it’s well worth checking out when you get the chance.

Open seven days a week, you can find the Exeter Phoenix next to the Royal Albert Memorial Museum on Gandy Street, just a five-minute drive from our nearest Exeter Central St. Davids hotel.

Along with The Cavern (which is less than 100m away), the Exeter Phoenix is one of the best places to catch a gig during your stay in the city. There’s always an interesting array of bands and artists on show. Previous performers range from familiar names like Wild Beasts, Willy Mason and The Hoosiers to the rather more obscure, such as the Dhoad Gypsies of Rajasthan.

Regardless of whether it’s pop or punk, rap, reggae or the downright obscure, you can always rely on the sound quality to be excellent, as (surprise, surprise) the Exeter Phoenix also houses its very own recording studios and radio station. Plus, the performance room’s 450-person capacity hits the sweet spot of being neither too big nor too small, but just right for retaining that feeling of intimacy that is so often lost in larger venues. 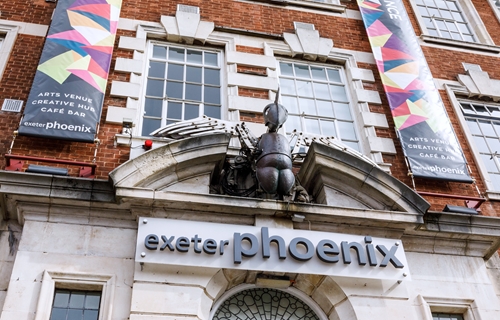 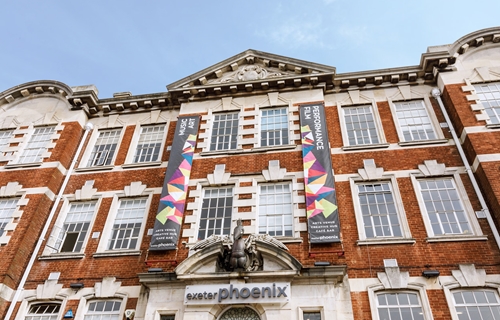 Performance and the arts at Exeter Phoenix

Nowhere else in Exeter contributes more to the city’s booming creative culture than the Exeter Phoenix. As a venue, it hosts touring theatre productions, dance troupes and comedy acts from across the UK. But it also promotes local performers at every turn, providing opportunities for them to network, train, practise and ultimately take to the stage and make it their own.

The sheer size of this former university building also allows for several art spaces and galleries. Previous exhibitions have showcased the work of contemporary artists from around the world that often blur the lines and break the boundaries between painting, sculpture, text and tech. As if that wasn’t enough, the Phoenix also runs courses and workshops for anyone to book a place on. See for yourself; they cover every creative topic in whichever form you can think of – there’s drawing, painting, writing, photography, animation, coding, textiles and much, much more.

And we’re still not finished there… if you fancy yourself as a film buff, then the Phoenix is also the home of Studio 47, a solar-powered cinema that hand-pick their programme from the best independent films and thought-provoking documentaries for you to feast your eyes on.

Food and drink at Exeter Phoenix

Phew! If you manage to tick off even half of what the Exeter Phoenix has to offer then hats off to you. You can literally spend entire days there! With so much to do, you really can build up quite an appetite. It’s a good job that the café bar doesn’t let the sky-high standards slip. Everything on the menu is locally sourced, lovingly made and doesn’t come remotely close to breaking the bank. The mac ‘n cheese is a big hit but we simply can’t resist the fish finger sandwich. Plus, there are veggie, vegan and gluten-free options too.

But that’s enough banging on about the food, what about beverages I hear you ask? The café bar is fully licensed and stocked with all the usual suspects, plus a splendid selection of local ales. Designated drivers need fear not, the coffee is a unique blend from Brazier Coffee Roasters that’s delicious.