One of the closest recommended bars to our Clapham hotel is No.32 The Old Town. The trendy, upmarket bar has the prices to match its look and feel, but get a seat on the sun-trap terrace overlooking Clapham Common and it’ll make perfect sense.

You might not immediately spot WC Wine & Charcuterie, but you’ll know when you do as the underground bar is housed in a converted public toilet on the eastern edge of Clapham Common. The cool, chic bar is a far cry from its previous incarnation, serving up meat and cheese sharing platters and excellent cocktails.

On the other side of the street is Venn Street Records, a buzzing venue that blurs the line between hip hangout, cool bar, record store and American diner. With regular live music, great food offers and two-for-one cocktail deals, it’s a favourite after-work and weekend spot.

Up by the Clapham North Underground station you’ll find two of our favourite bars. Adventure Bar is a quirky cocktail bar with a lively soundtrack, great-value-for-money happy hour deals and beer pong tables. Next door is 64th & Social, another vibrant cocktail joint with big booths, a playful mix of funk, house and disco and regular two-for-one cocktail deals from Wednesday to Saturday night.

North of Clapham near Battersea Park is Lost Society, which borrows from the nearby park with its leafy green interior. The stylish interior is matched by a killer food and cocktail menu, with popular events including their disco brunch, Sunday roast and weekend DJ line-up. 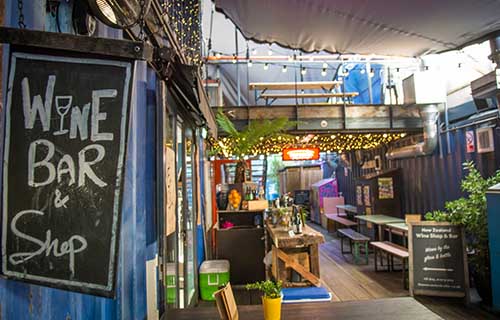 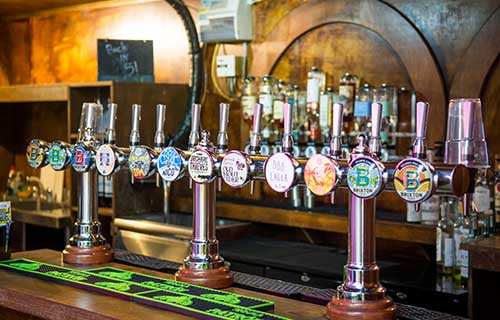 Overlooking Clapham Common, The Windmill is the perfect place to start your adventures. The gastropub has a large beer garden which is perfect for sunny days spent your way through their 28-strong gin menu. If you visit on a weekend, expect some great live music whilst you’re there.

A short walk from there towards Acre Lane is The King & Co, an independent pub with a distinct hipster feel to it thanks to its cracking craft beer selection, tasty street food eats and artfully mismatched furniture.

The nearby Hope & Anchor takes a similarly modern approach, with a bright and colourful approach to design and decor. The garden terrace is a real winner thanks to its central fire and cool huts, while for food and drink look no further than their cocktail and burger menu.

Take a trip back in time at the Powderkeg to the east of Clapham on St John’s Hill. The Victorian-themed pub has nailed its subject matter, with of-the-era decor and bartenders in traditional outfits brewing potent cocktails, pouring British craft beer and generally behaving like it’s 1899.

Where the Powderkeg channels its Victorian history, the Four Thieves on Lavender Hill races ahead into the future, brilliantly blurring the lines between games arcade, pub and all-out-entertainment venue. As well as being a pub with over 350 types of gin and dozens of beers including from their on-site brewery, the converted music hall offers crazy golf, retro arcade games, an escape room, VR booths and more.

A late-night mainstay in Clapham since the Victorian era, Clapham Grand opposite Clapham Junction is a refurbished music hall with a varied events programme spanning live music, movie nights, stand up comedy and club nights. Music-wise, the club nights span reggae, house, disco, RnB and even alternative bingo nights with Friday and Saturday events running until 4am.

More good times can be had at Infernos, another venerable Clapham club which has been going since the 80s. The Clapham High Street club is a popular throwback club, with theme nights including 80s anthems and disco, but it also has a modern edge, with stylish design and private karaoke suites.

Where Clapham neatly caters to the mainstream dance scene, Brixton is where the cool cats go clubbing. Phonox on Brixton Road is an intimate rave cave open Friday, Saturday and some Sundays, it’s open until 4am, playing a selection of underground dance music including house and techno.

Half a mile north of Phonox is Brixton Jamm, another alternative nightclub with an open-minded music policy covering disco, reggae, drum and bass, UK garage and more. Plus, with a large courtyard, it’s a good source of day-time partying if you can’t last until 5am and the club’s official closing time.

If you catch the underground to Brixton, you’ll spot The Prince of Wales close to the station. A popular pub with a large roof terrace, it’s something of a summer institution, with regular rooftop discos with guest DJs including Norman Jay.